My twin sister and I lost our mother and father, and then our maternal grandmother, in quick succession not long after we were born, and so Debra and I were sent to live with our paternal grandmother and grandfather, in Windsor and I currently still live at the same address.

Amongst other work, my grandfather tended the green at the Windsor Bowls Club, and my grandmother did what women in those days did – kept the household running, and children clothed and fed as best she could.  We were lucky, we thought, to have our aunts help our grandmother look after us.  They were teenagers, and so special to us.  My grandmother loved us as though we were her own children and we got on with life. 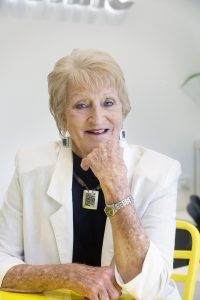 And that is how we ended up attending Windsor State School, not long before the Second World War broke out.  I have many vivid memories of that time, some strange and frightening, the war casting a shadow over daily life, and many warm happy ones too.

I remember going along with my sister, in the clothes our grandmother had made for us to wear to school (no uniforms then), and waving grandma goodbye after we crossed Lutwyche Road, making sure to mind the trams than ran to the city from Windsor, and the horses and carts that delivered everything from fruit and vegetables to wood.  We used to ask grandma to wait for us, and not to move from where she bade us goodbye until the school bell rang at the end of the day.  It wasn’t until we were a little older that we realised that that she hadn’t stood there waiting the whole day- she was always there to collect us.

Grandma, like some of the other mothers, would volunteer to make penny toffees in paper containers and toffee apples for the school’s fundraising drives.  I remember that all mothers who volunteered to make toffees were given the required amount of sugar, an extra added to their rations.

Mrs Matheson was my first teacher, at infant school.  She was a small kind lady with inexplicably frizzy hair, and an accomplished artist.  It was still a beautiful school then, with only the original building standing at the time.  It still looks the same to me.  I remember there was a boundary line between the infants and the “big school” – grade 3 and up, as it still is today.  The big children seemed like giants to us at first, so Debra and I stuck close together.

After the war broke out in 1939, I remember how our school life, indeed all our lives, changed.  All girls knitted scarves for the soldiers and we had Friday afternoon sewing classes.  Windsor Park held an airstrip and barracks.  You never got far without seeing air raid trenches.

I won’t forget the sound of the air raid siren.  The air raid siren was situated on a telegraph pole on Lutwyche Road, near the Windsor Council Chambers.  The sirens would sound and all the pupils were marched in an orderly fashion into the trenches at the school.  All children wore their identity disk around their necks along with a large cork, to place in our mouths to lessen the concussion should the bomb fall.

By far though, my best memory of “big” school was the lunch break.  The bell would sound and we’d fly down the long flight of cement stairs from our classrooms, jumping them two at a time as fast as our little legs would carry us, to the Harris street side gate.

Why this pandemonium? Of course it was to be the first to reach A1, the pie man who waited in the street with his horse and cart.  Beautiful, hot pies in the pie ovens, fuelled by burning wood.  I can still see the smoke coming out of the chimney of the cart, and feel my mouth watering.  The first child to reach A1 would take control of the black sauce bottle and have the job of (frugally!) putting the sauce on to the pies.

Back to all news
Up to Date